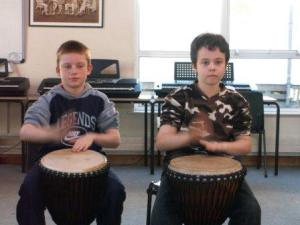 African Drumming is one of our most popular workshops here at Music Workshop Company. Workshops are based on traditional drumming circles creating a positive, inclusive space in which to explore the music and culture of Africa, boost self-confidence and develop key skills. Our workshops are suitable for everyone, from school children to big business. African drumming is a fantastic, fun, team building exercise and sessions can be structured specifically to develop communication and performance skills, or to focus on African culture, rhythms and music.
The cultural history…
The djembe drums, which we use in our African Drumming workshops, originate from West Africa, from countries such as Ghana and Guinea. They are goblet-shaped; carved from a single piece of hardwood and covered with a goat skin. Played with the hands, the djembe produces three distinct tones or notes and is valued for its versatile, expressive voice.
Traditionally the djembe was used by storytellers and healers, as an instrument of reconciliation in disputes within the community and for dancing for social occasions such as births, marriages, rites of passage, funerals and even the planting and harvesting of crops, all of which ceremonies have their own songs, dances and rhythms.
According to the Bamana people of Mali, the djembe gets its name from the saying, “Anke dje, anke be,” which translates as, “Everyone gather together in peace.” Dje translates to gather, and be translates to peace.
Learning and playing the djembe is a direct link to the ancient cultural traditions of West Africa. It is also very beneficial in ways which may not be immediately obvious.
Drumming increases wellbeing…
Playing the djembe is known to increase heart rate and blood flow. Apart from the physical effort of hitting the drum and the sense of the vibrations pulsating through the body, there is a certain tempo at which the heart rate accelerates. This happens once the beat is faster than 120bpm (two beats per second). The increased heart rate means that blood flows around the body faster, giving you a great internal workout. Slower rhythms create a calming effect and can help relieve stress.
Drumming is great for teamwork…
When people drum together, forming one unified sound, they form an energy greater than the sum of the individual players. Everybody’s contribution is important as the group works together towards a common goal. This can be useful in balancing a team or a class dynamic. Those less used to taking charge gain a sense of empowerment, and the more confident members or those in managerial roles learn to take a step back and see the value of everyone in the group. 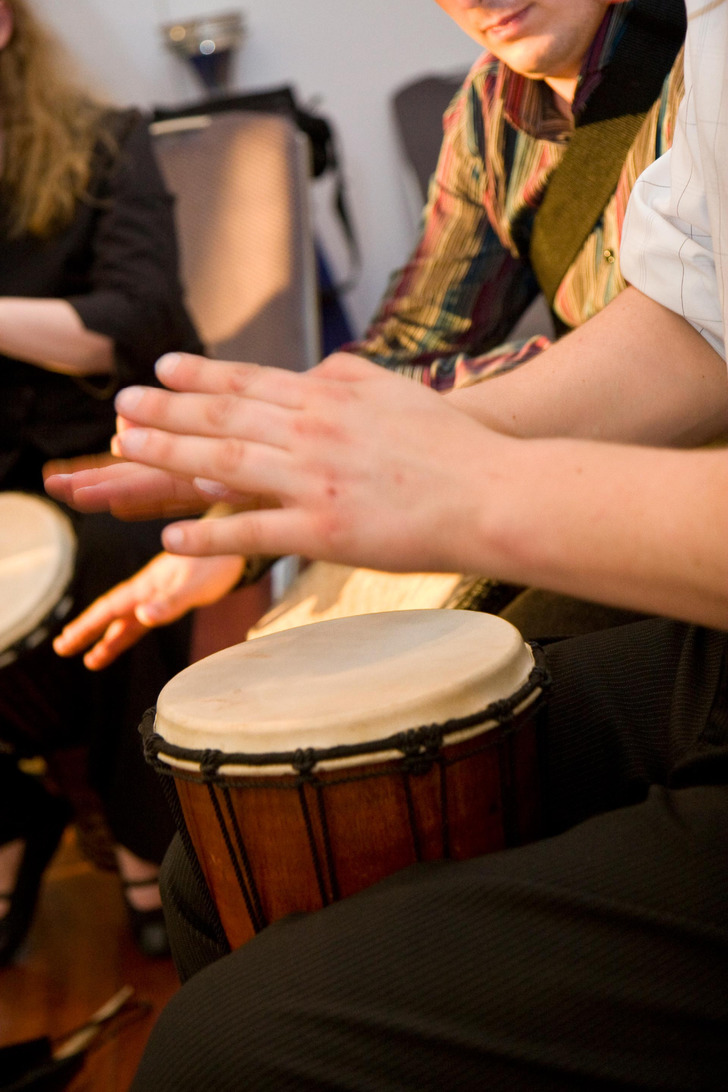 Drumming teaches you to listen…
All of our workshops are taught by listening, in the same way music and storytelling have been passed on for centuries. There is no music reading. Learning any music in this way teaches you to listen in a much deeper way than we normally do, particularly within a group. If you observe yourself in conversation you may find you’re simply waiting for the other person to stop talking so you can say what you want to say, rather than really listening to them and responding to what they think. Drumming helps develop the ability to listen to more than one thing at once, and to listen to other people rather than focusing on your own sound.
Drumming builds confidence…
Trying something new where you are able to create music right from the start is deeply satisfying and great for self-esteem. Drumming uses the same parts of the brain which we use to compose speech. It is in itself an extrovert, joyous activity and can therefore be a liberating experience for anyone who is usually shy in a group situation. It can even help with skills such as public speaking. As the workshop progresses and you find yourself enjoying a new skill, confidence grows.
If you would like to enquire about booking one of our African Drumming Workshops please get in touch. We look forward to drumming with you soon.
Tagged as: AFRICAN DRUMMING, DJEMBE, MUSIC WORKSHOP
Share this post: