Composition and Creativity at Newstead Wood 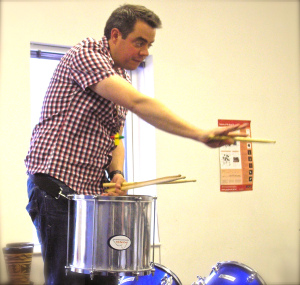 This month our blog is about a two-day composition workshop in Orpington, which has become an annual event.
The workshop participants are students from years 7, 8 and 9 at Newstead Wood School, an all girls’ school where up to 30% of the children take regular instrumental lessons. The school was graded as “Excellent” in a recent Ofsted report. MWC has run at least one project a year at Newstead Wood since 2003.
Our workshop leader for this project is Chris Woodham, a percussionist with extensive experience in orchestras, folk bands, teaching, workshop leading and world percussion.
“The starting point with all of my workshops, composition or otherwise, is drumming,” says Chris, “That’s the way in, and the way into the students understanding that I’m an expert. It’s accessible; everybody can hold a drumstick; and I’ve found that it’s a great way to get everybody involved and working towards the same goal. Then the tuned work comes out of whichever instruments they have.”
Chris began the workshop by leading a Samba on drums and percussion, and quickly went on to composing with the children. He began with some prepared material; for years 7 and 8, the theme of ostinato writing, in which he explained about the power of repetitive figures which composer Karl Jenkins uses to great effect. For the year 9 children, many of whom have taken part in the workshop in previous years, he began working on extended chords, starting with the bass line from a pop song by Emili Sande, and helping the girls to develop their own compositions based on complex chord progressions.
John Parsons, Head of Music, explains why a two-day workshop like this is so important to his students’ musical development:
“The kids are having an immersion in being challenged and extended, spending two days fully absorbed in a project,’ he says. “They have an instrument in their hands and they’re thinking musically all day for two days, which is clearly an advantage to them.
“It’s creative in a different way from orchestral rehearsals,” he continues. “In orchestral rehearsal they’re playing off someone else’s music whereas here they’re creating a musical event, building in key rhythmical skills and an understanding of the more technical aspects of chord recognition.”
A composition workshop can help students in more subtle ways too.
“There’s definitely a huge improvement in confidence,” says John, “and the natural leadership really comes out in some of the children.
Chris agrees; “I’ve definitely seen them develop creatively, coming up with ideas and trying them out; maybe even learning when something doesn’t sound very good and accepting that and coming up with new solutions,” he says.
The final goal of this workshop is to produce a polished 20-minute performance as part of the school concert. Other pieces on the programme have been worked on all term. The challenge is to produce completely new material and bring it up to a comparable performance level, all within the two days. 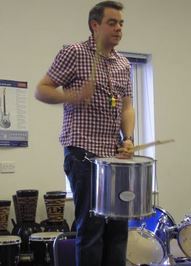 “I maintain high levels of expectation,” explains Chris, “If you have a very high expectation, they perform to a really high standard in the evening. Even with someone playing drum kit for the first time I’ll make sure they feel that someone is expecting them to do well and giving them the facility to do well. Negativity is a real mistake. If the students have a positive experience, at the end of the two days they’re only going to remember that feeling of positivity.”
And the pupils clearly take away a very positive experience. The composition created in the workshop was a rousing finale to the school concert with audience participation and a warm ovation for all the participants.
One of the year 9 students says, “When I pick my violin up the next day it feels like I’ve spent hours and hours practicing. It’s really great being guided through making a piece and hearing it all put together at the end.”
Another year 9 violinist agrees; “I’ve done the workshop for three years now,” she says. “My confidence has definitely increased and I’ve discovered there are so many different styles of music. It’s good to learn to use my violin to explore them.”
Tagged as: COMPOSITION, MUSIC WORKSHOP
Share this post: