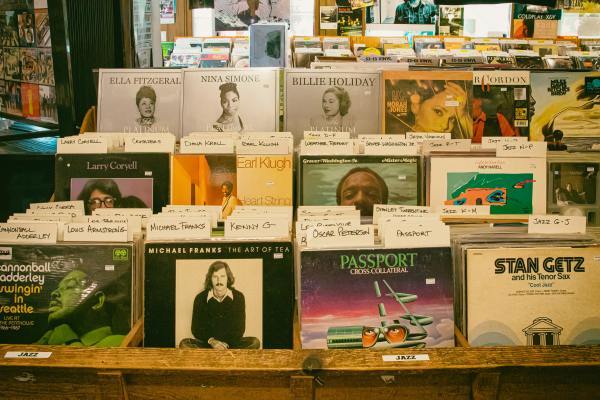 Jazz standards are musical compositions that form a fundamental part of the repertoire and language of jazz.
They are often performed and recorded, and are therefore widely known to listeners.
They are also used within education to introduce key musical concepts such as certain chord progressions and modes.
Most of the compositions that become standards have their roots in popular culture. The 1959 song My Favourite Things first appeared in The Sound of Music, but it wasn’t long before jazz musicians began producing their own stylistically diverse versions of the melody. John Coltrane’s approach (1960) was to play extended modal sections around the tune with such high intensity that it turned into an almost hypnotic dance:
Whilst Sarah Vaughn’s version (1961) was slow, mournful, and forced a new emotional twist onto the unaltered lyrics:
The original:
The majority of jazz standards originate in the first half of the 20th century. Each decade brought its own set of standards, and this can provide a useful snapshot of the changing musical style of the period. Here’s a whistle-stop tour through some of the standards that defined the first part of the last century…
The 1920s saw the beginnings of the Jazz age in America and the first songs that would become standards. These songs often contained simple harmonies:
Fats Waller’s Ain’t Misbehavin

Some interesting facts about Fats:

Fats Waller was kidnapped while leaving a performance in Chicago in 1926. He was bundled into a car and taken to the Hawthorne Inn, which was owned by the notorious gangster Al Capone. Waller was ordered inside the building where a party was in full swing. With a gun to his back he was pushed towards a piano and ordered to play. Terrified, he realised that he was the ‘surprise guest’ at Capone’s birthday party. Capone released him after three days.
Waller died on December 15, 1943, while traveling aboard a Los Angeles to Chicago train near Kansas City, Missouri. He was just 39 years old.
The 1930s is considered to be the start of the “Great American Songbook” era. Many of the standards from this decade came from Broadway, such as George Gershwin’s hit, Summertime:

The 1940s was the era when improvising musicians began writing their own songs. Theloneous Monk’s Round Midnight shows off the developing complexity of the jazz repertoire during this period:

Learning a standard will help develop any student’s understanding of the language of jazz. The process goes far beyond scales, modes and chord progressions. Too much time spent on technical exercises without improvising on tunes can quickly become boring. Conversely, simply playing tunes without infusing the new vocabulary that accrues from practicing exercises can hold the student back. It’s a question of balance, curiosity and immersion.
When learning jazz standards, it is always helpful to memorise the melodies and chords. The act of note reading can interfere with listening and the intuitive improvisation process. The jazz saxophonist Lee Konitz suggested playing the melody over and over, embellishing it slightly each time. Eventually it will no longer sound like the melody but an improvisation. This method also gives the student the opportunity to experiment with notes that maybe outside the expected scales or chord, enabling them to begin to develop a unique style of their own.
Label
This blog is published with thanks to Ed Alton who furnished us with his extensive knowledge of jazz. Ed is part of the MWC workshop team.
Feature image with thanks to Mick Haupt at UnSplash
Tagged as: FATS WALLER, JAZZ, JAZZ LEGENDS, JAZZ MUSIC, JAZZ STANDARDS, JOHN COLTRANE, MUSIC, MUSIC EDUCATION, MUSIC HISTORY, MUSIC IN SCHOOLS, MUSIC TEACHING, MUSIC WORKSHOP COMPANY, POPULAR CULTURE, SARAH VAUGHN, THELONIUS MONK
Share this post: