The Concerto: Developing the Soloist 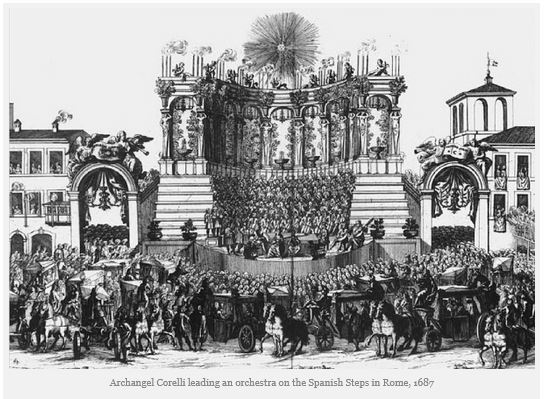 Today the word concerto is typically used to describe a piece of music that features a particular instrument or instruments as a soloist, accompanied by an orchestra. Soloists are the most glamorous, highly paid classical musicians and their concerto performances demonstrate the pinnacle of their skill. However, the concerto was originally a composition where people played together in concert/consort, making a ‘concerted effort’.
The Baroque Concerto
The Concerto first became a key part of the repertoire in the Baroque era. It was used at the end of the 17th Century by violinists such as Corelli. Corelli is known for his Concerto Grossi which feature a small group of soloists accompanied by a larger orchestra, referred to in the score as ‘ripieno,’ a word that literally means stuffing or padding.
Other composers associated with the Concerto who were writing in Italy in this period include Vivaldi and Albinoni. Albinoni was one of the first composers to write concerti for the oboe, an instrument that was then fairly new to Italian ensemble music. Vivaldi is perhaps one of the best known composers of concerti, his most famous works being his Op. 4 “Le Quattro Stagioni” or “The Four Seasons” for solo violin. Unusually for the period, when Vivaldi published the concerti he included accompanying poems (possibly written by Vivaldi himself) that introduced the ideas illustrated in the music.
The Concerto was also a popular form in Germany with composers such as Telemann and J. S. Bach. Perhaps the most famous of J. S. Bach’s Concerti are the six Brandeburg Concerti, BWV 1046–1051. The Concerti have different soloists:
Concerto No. 1 in F major, BWV 1046 – two corni da caccia (natural horns), three oboes, bassoon, violino piccolo, two violins, viola, cello, basso continuo
No. 2 in F major, BWV 1047 – 1 Tromba (trumpet), 1 Flauto (recorder), 1 Hautbois (oboe), 1 Violino, concertati, è 2 Violini, 1 Viola è Violone in Ripieno col Violoncello è Basso per il Cembalo
No. 3 in G major, BWV 1048 – tre Violini, tre Viole, è tre Violoncelli col Basso per il Cembalo
No. 4 in G major, BWV 1049 – à Violino Principale, due Fiauti d’Echo (recorders), due Violini, una Viola è Violone in Ripieno, Violoncello è Continuo
No. 5 in D major, BWV 1050 – une Traversiere (flute), une Violino principale, une Violino è una Viola in ripieno, Violoncello, Violone è Cembalo concertato
No. 6 In B-flat Major BWV 1051 à due Viole da Braccio (viola)., due Viole da Gamba, Violoncello, Violone e Cembalo
The Concerto in England was developed by musicians from the continent, particularly the Italian composer Lully and George Friedrich Handel, from Germany.
Key terms from this period include:
Concerto da Chiesa – Church Sonata which usually had abstract movements
Concerto da Camera – Chamber sonatas with dance style movements
Concertino – was used for the group of soloists
Ripieno – which means “full”. This term was used to refer to the accompanying orchestra 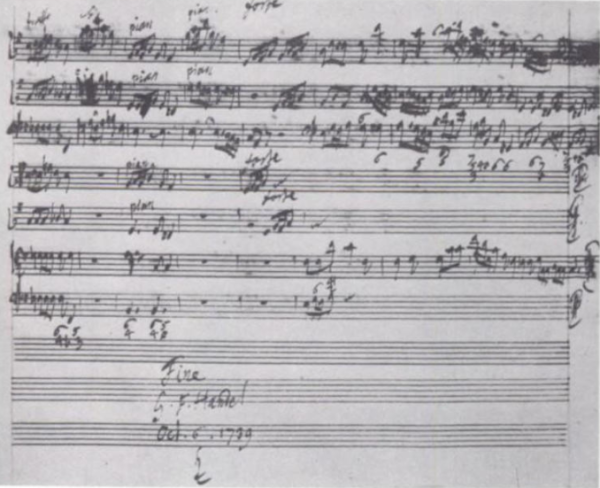 Image: Photograph of the original manuscript of Handel’s concerto grosso Op.6 No.4, 1739 (from Page 345 of P.H.Lang’s Handel)
The Classical Concerto
Many of the most famous concerti from the Classical period were composed by W.A. Mozart. Mozart’s contribution to the Concerto form was extensive and included 21 works for solo piano, one for 2 pianos, one for 3 pianos, five for violin, concertos for flute, oboe, clarinet, bassoon and horn as well as a Sinfonia Concertante for solo violin and viola and a Concerto for flute and harp. In Mozart’s concerti the soloist often alternates with the main ensemble, almost setting the soloist against the accompanying musicians.
Beethoven developed the Concerto form from Mozart’s compositions utilising the interplay of soloist and orchestra in a different way, some suggest in a more collaborative way. Beethoven wrote 5 piano concerti, a violin concerto and a triple concerto for piano, violin and cello.
The Romantic Concerto
During the Romantic Period, several virtuosi utilised solo works including the form of the concerto to demonstrate their abilities. Paganini, an accomplished violinist wrote 6 violin concerti which allowed him to show off his skills. Liszt, an outstanding pianist, wrote 2 piano concerti.
Other key composers of concerti in the Romantic period include Schumann who wrote concerti for piano, cello and violin which are all still popular works today. Dvorak wrote 4 concerti, 1 for piano, 2 for violin and 2 for cello, the more famous of which is the Concerto in B minor, Op 104. Brahms wrote 4 concerti, 2 for piano, one for violin and one for violin and cello. A concerto was often written with a particular player in mind. The Brahms Violin Concerto was written for the violinist Joseph Joachim.
Here are some useful links with more information about the history, form and relevance of the concerto…
Bach Brandenburg Concerti
Modern ideas
Tagged as: CLASSICAL MUSIC, CONCERTI, CONCERTO, J S BACH
Share this post: