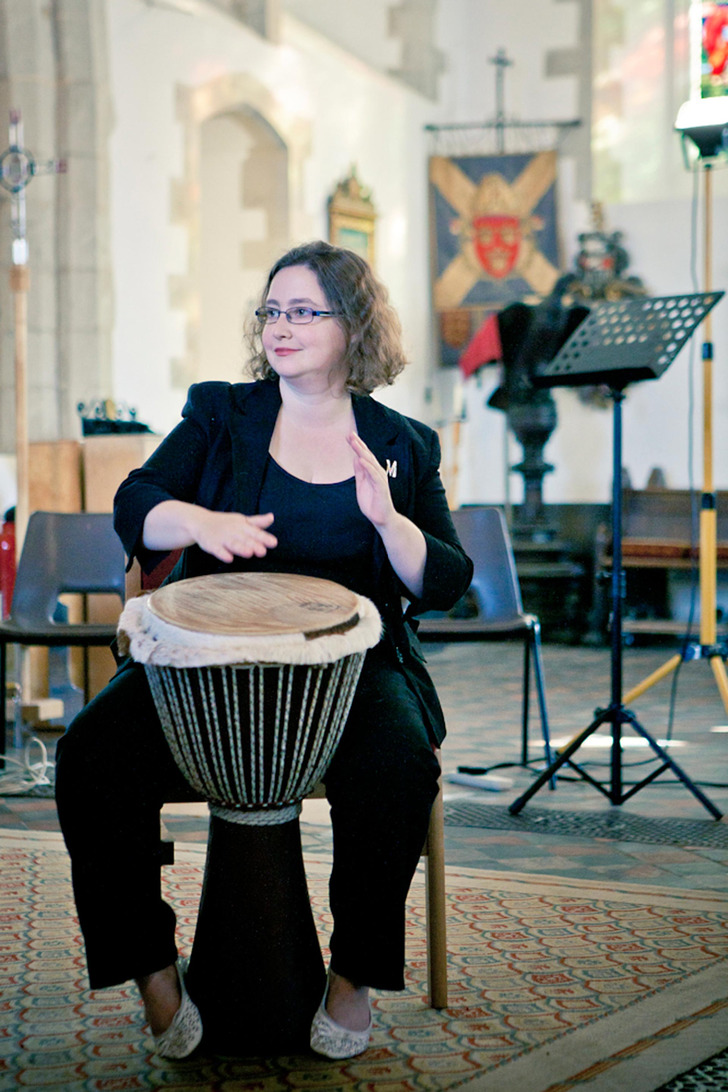 We have just celebrated our tenth anniversary here at Music Workshop Company (MWC), and to mark this achievement, we are starting a blog! This will be a space to share our experiences, give you ideas for musical activities, and to write about the projects we do.
MWC was seMicia darabukat up by Maria Thomas in 2002, since when the company has worked with over 50,000 participants, from toddlers to grandparents, in schools, community groups and businesses all over the UK.
Maria studied Music Workshop Leading at Trinity College of Music. She was excited to observe many fantastic musicians leading education projects. It struck her that there were schools that wanted workshops but didn’t know where to go, what would suit them or which workshops were of high quality, and that there were musicians offering great workshop skills who didn’t know how to reach the schools. She had the idea of an agency to bridge this gap; a company that says to the school, “What do you want? We will write the project for you.” And so MWC was formed.
Some of Maria’s favourite MWC projects to date include a junk-percussion composition workshop with samba rhythms and an “outer space” theme, teaching African drumming in a marquee at a Woodlands Festival in Anglesey, a teacher team building project in Hampshire and a “Play in a Day” at a holiday club in Oxfordshire.
MWC has run workshops in schools, nurseries, shopping centres, sports centres, marquees, in fields and parks, in tennis courts, in Wembley and Emirates Stadiums, village halls and even in libraries.
“I love running MWC, because I am passionate about getting people to engage with music,” says Maria, “Whether as members of an audience or more active participation through playing instruments and singing.”
She also believes that the experience of a good music workshop can have long-term implications for the participants.
“It might seem with a one day workshop in a school, for example, that the children might not have the chance to follow it up,” she explains, “But I believe it is important to give someone a chance to try something. They may come back to it later in life. It may give them the confidence to try new things.”
So MWC has developed into a client-centred company, working with experienced workshop leaders who are also full time musicians. When they aren’t running MWC workshops, the musicians spend their time playing in bands and orchestras, teaching, playing for recording sessions, and as the company grows, being parents to a growing brood of MWC workshop leaders’ children
We don’t know what the next ten years will bring, but now we’re blogging once a month we hope you enjoy sharing our experiences.
Tagged as: MUSIC WORKSHOP, MUSIC WORKSHOP COMPANY
Share this post: