Leonard Bernstein: A Musician for all Ages 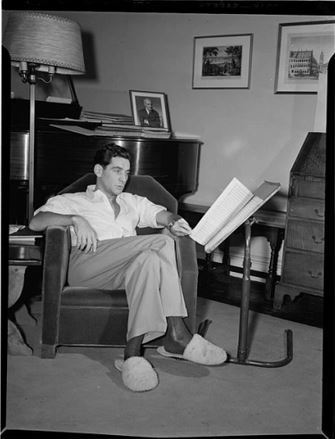 Summer 2018 marks the centenary of the amazing musician Leonard Bernstein who was born on 25th August 1918.
Bernstein was a composer, conductor, author, educator and pianist, perhaps best known for what some consider the greatest of all American musicals: West Side Story.
Bernstein’s influence on the American music scene cannot be underestimated. His voice can be heard through his compositions, his recordings, the popularity of composers he championed and his influence on great conductors such as Marin Alsop, Paavo Jarvi, Seiji Oazawa and Michael Tilson Thomas.
Throughout his career Bernstein struggled with balancing the different parts of his work, but he is remembered for his great compositions and conducting work, his championing of other composers, his influence on other conductors and his inspirational education work.
Time spent at Harvard (he graduated in 1939) was influential to Bernstein’s work. His tutors, Edward Burlingame Hill, Walter Piston and David Prall, the conductor Dimitri Mitropoulos and friends he made during this period including Donald Davidson and Aaron Copland all made an impact. Copland became a major influence for Bernstein who called Copland his “only real composition teacher”. After Harvard, Bernstein attended the Curtis Institute of Music in Philadelphia where he studied conducting with Fritz Reiner who was one of his mentors.
Bernstein continued his education at the Boston Symphony Orchestra’s summer institute, Tanglewood, an association that continued and inspired him throughout his life. As a student at Tanglewood, he studied with Serge Koussevitzky, who became a sort of father figure, influencing the emotional way in which Bernstein interpreted music. Bernstein became Koussevitzky’s assistant and later dedicated his second Symphony to him.
His break as a conductor came in 1943 when, as assistant conductor of the New York Philharmonic Orchestra, he stepped in at just six hours notice when Bruno Walter was taken ill. The New York Times put the story on their front page and so Bernstein’s fame as a conductor spread. 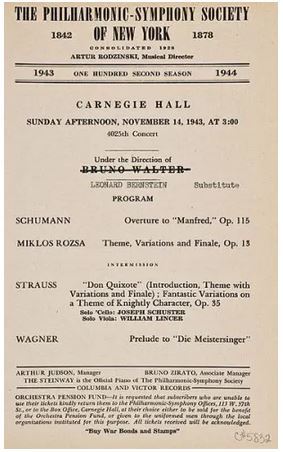 But it was the following year that marked him out as an important composer, with premieres of The ‘Jeremiah’ Symphony (No. 1) (heavily influenced by Copland) the ballet Fancy Free and the musical On The Town.
Bernstein preferred to collaborate with others, rather than working alone. Key collaborators included the choreographer Jerome Robbins, and the lyricists Betty Camden, Adolph Green, Arthur Laurents and Stephen Sondheim.
His career included many firsts. He conducted the American premiere of Britten’s Peter Grimes, the world premiere of Messiaen’s Turangalila Symphony, the world premier of Ives’ Symphony No 2. He was the first American conductor to appear at La Scala Opera House in Milan where he worked with Maria Callas, and the first to complete a cycle of recordings of all nine Mahler Symphonies. He worked with many of the World’s top orchestras including the New York Philharmonic Orchestra, the Vienna Philharmonic, the London Symphony Orchestra, the Israel Philharmonic, Orchestre National de France, Boston Symphony Orchestra, Bavarian Radio Symphony Orchestra and the Berlin Philharmonic. He also conducted at La Scala, the Vienna State Opera and the Metropolitan Opera.
One project that raised his profile across America was his television series for CBS, Young People’s Concerts. This was the first series of music appreciation programmes produced on television. The programmes were very influential and highly acclaimed by critics. Some were released on record, leading to a Grammy in 1961.
In 1973, Bernstein was appointed to the Charles Eliot Norton Chair as Professor of Poetry at Harvard University where his televised lectures compared musical construction to language. In 1982, along with Ernest Fleischmann, he founded the Los Angeles Philharmonic Institute as a summer training academy similar to Tanglewood. He later founded a similar project – the Pacific Music Festival in Sapporo with Michael Tilson Thomas. In 1990 he received the Praemium Imperiale, an international prize awarded by the Japan Arts Association. Bernstein used the prize to establish The Bernstein Education Through The Arts (BETA) Fund Inc.
Throughout his career Bernstein struggled with balancing the different parts of his work, but he is remembered for his great compositions and conducting work, his championing of other composers, his influence on other conductors and his inspirational education work.
Our picks on where to hear Bernstein’s work this summer (2018):
Chichester Psalms – 2nd August Hereford Cathedral with Carlo Rizzi and the National Youth Orchestra of Wales with the National Youth Choir of Wales
Symphony No 2 The Age of Anxiety – 10th August Usher Hall Edinburgh with Sir Simon Rattle and the London Symphony Orchestra
West Side Story – 11th August at the BBC Proms at the Royal Albert Hall and live on BBC Radio 3 with John Wilson and the John Wilson Orchestra
On The Town – 25th August at the BBC Proms at the Royal Albert Hall and live on BBC Four with John Wilson and the London Symphony Orchestra
Serenade after Plato’s “Symposium”, for solo violin, strings, harp, and percussion, West Side Story: Symphonic Dances, On the Town: Three Dance Episodes – 25th August at Usher Hall, Edinburgh with Marin Alsop and the Baltimore Symphony Orchestra featuring Nicola Benedetti on Violin
Music by Bushra El-Turk, Bernstein, Sondheim, Copland and more Proms at … Cadogan Hall 7: Bernstein on Broadway and Beyond – 1pm on 27th August at the Cadogan Hall, London.
"El-Turk, 35, is London-born, from a Lebanese family. Trained at the Guildhall School of Music and Drama, she decided to become a composer aged 17, when “I woke up to a blackbird twittering a rhyth
Recommended listening:
Bernstein as composer
Bernstein as conductor
Tagged as: BERNSTEIN, COMPOSER, COPLAND
Share this post: