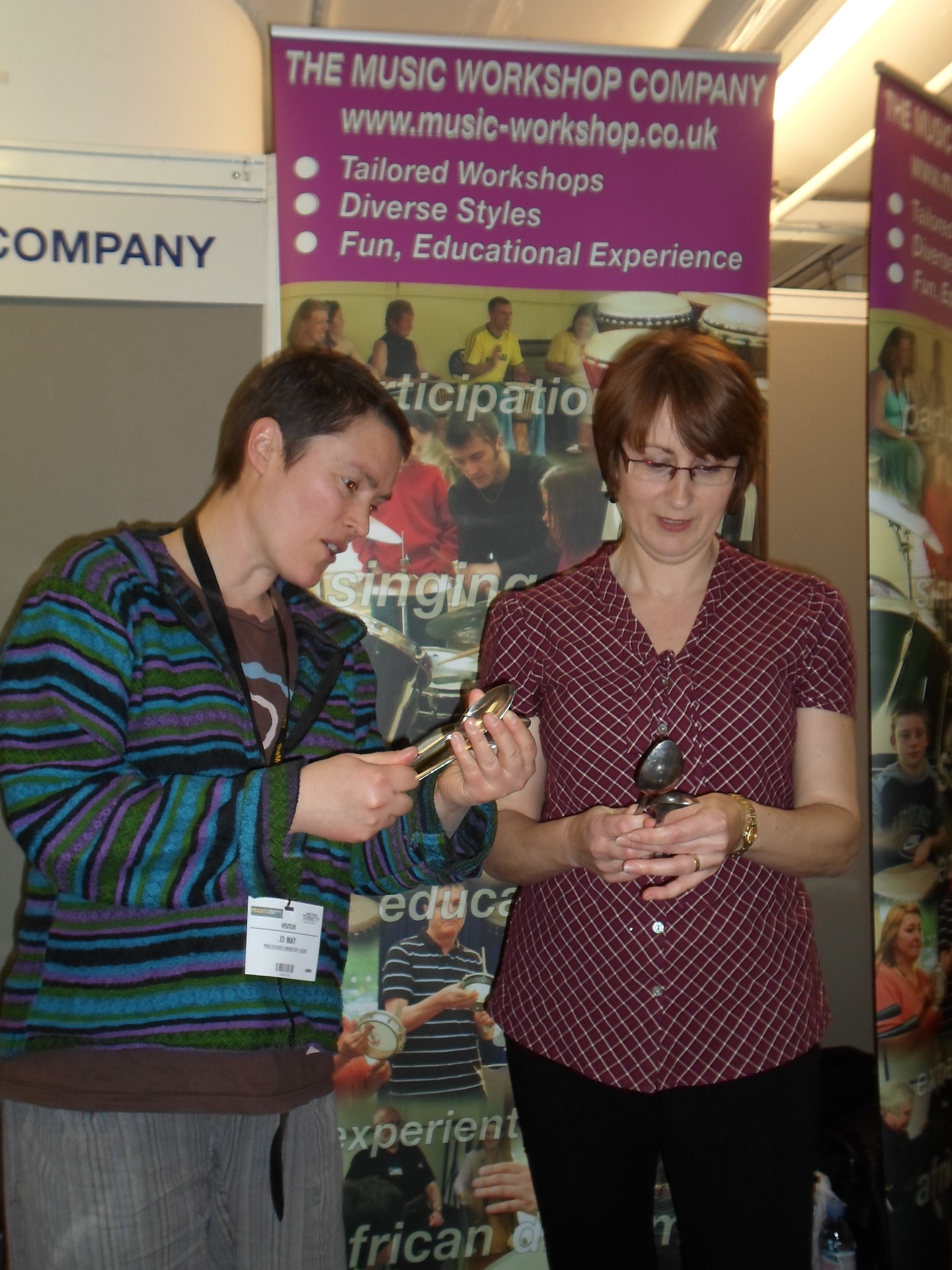 We love unusual instruments at the Music Workshop Company. This month’s blog is by professional percussionist and workshop leader Jo May, who specialises in workshops teaching the spoons. Jo trained at the Royal College of Music and has performed with orchestras including the BBC Symphony Orchestra. She explains how she came to play the spoons and why a Spoons workshop offers an easy introduction to music for any child.
“For the last few years, I’ve been running Spoons Workshops in schools, and for festivals, parties and events. That’s spoon playing, not spoon making!
I first became interested in playing the spoons whilst playing in a folk band. We were learning a song, and I’m not sure why, but it really felt as if it was calling out for spoons. I found a tuition video by a fantastic American musician and historian called David Holt. I learnt some of the basics and went on from there.
There are spoon playing traditions in many different countries around the world, including Ireland, America, Turkey and Russia. I think it’s a tradition that’s been dying out recently in this country but there are still plenty of spoon players around and I’m really keen to encourage more people to play. Often when I’m running workshops people will say, “Hey! My grandad/uncle/great grandma used to play the spoons.”
Spoons are great fun to play and obviously we have them in our homes, so they’re very accessible and very portable too.
I started just using ordinary stainless steel spoons from the kitchen but I love experimenting with different types of spoons now. I’ve built up a collection from rummaging around in junk shops, hardware shops and kitchen shops, as well as searching for spoons that have been made specifically for playing. In workshops, I have an assortment of spoons for participants to try out:
ordinary stainless steel ones
assorted wooden ones carved especially for playing (some with finger grooves)
aluminium ones made from de-activated bombs in Laos
a few different sized/coloured plastic measuring spoons recently acquired from rooting around a kitchen shop… (the largest ones make great bass spoons!)
a selection of smaller wooden and metal spoons for smaller fingers
an assortment of joined-up spoons for younger children and anyone who has difficulty with the grip

I usually run my Spoon Workshops with accompaniment from a guitarist or fiddler. It’s brilliant to have a tune to work with. I also run sessions without accompaniment, and they usually involve more singing. I teach some basic techniques and we usually work on a little routine to go with a tune or song; maybe a folk song, a well-known tune or an old-time music hall song. And it’s always great to end the day with a performance from some of the participants.
I find that spoon playing is brilliant for co-ordination, particularly fine motor skills. I often try to involve movement and singing too, stamping your feet, singing and moving in time with the music whilst playing the spoons is a lot to think about. It’s also great for improving rhythm, teamwork, creativity, listening, performance, confidence and focus.
Most of all, spoon playing is fun and really open to anyone. Many children go home and show their families how to play, which is brilliant. There’s no need to go out and buy expensive, large instruments, just head to the cutlery drawer.”
To enquire about a Spoons Workshop, contact the Music Workshop Company today.
Tagged as: FOLK MUSIC, MUSIC WORKSHOP, Spoons
Share this post: