The Threat to EUYO – A European Tragedy 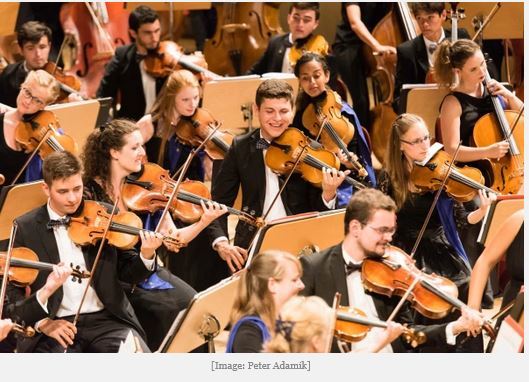 The musical community reacted with dismay and disbelief last month at the news that the European Union Youth Orchestra (EUYO) was to close in September 2016 following a loss of funding from the EU.
Immediately, huge numbers of supporters from across the globe joined the campaign to #SaveEUYO.
UPDATE
The EUYO were saved and continue to thrive.
Deborah Annetts, Chief Executive of the Incorporated Society of Musicians expressed the feelings of music lovers and musicians, saying,
"This news is devastating and we urge the Commissioner to reverse this decision and find ways to continue to support this ensemble. The European Union Youth Orchestra (EUYO) is a unique ensemble, bringing together the promising young musicians from 28 countries; it has produced some of the most celebrated top musicians of our generation. The fact that this ensemble cannot be recognised as the asset that it is, is nothing short of a tragedy."
The EUYO, originally called the European Community Youth Orchestra, has existed since 1976. Founded by Lionel and Joy Bryer, respectively the Chairman and Secretary General of the International Youth Foundation of Great Britain, the plan was to create an orchestra that would represent the European ideal of a community working together to achieve peace and social understanding.
After nearly 40 years successfully fulfilling this role, the announcement came that the orchestra was to close because of a policy change. The news was not the result of a targeted funding cut, but the result of a decision that there should be no cultural funding for individual organisations. The idea behind this policy, which actually involves a 7% increase in overall funding, was to encourage national organisations to become more ‘European’ and, in a move described by arts writers and musicians as “ignorant,” overlooked the pan-European nature of the EUYO.
As arts journalist and former arts correspondant for the Times, Simon Tait, explained in his column, Taitmail,
"It is not because of some artistic judgement by the funding authorities; it isn’t that the orchestra has had a dip in form, or that audiences have stopped coming to hear it; there is no funding crisis that makes the EUYO an intolerable luxury. It is being killed because it doesn’t fit a new policy: it isn’t a national body seeking to become more European by forging partnerships with other national bodies in other European countries in the current imperative; it is an existing pan-European organisation, and they are no longer to be funded. The EUYO was the result of a European Parliament resolution of 1976 and until 2013 was supported as a cultural ambassador for the EU. It has players from all 28 member states and its quality is such that it has been conducted by Bernstein, Karajan, Barenboim and Rostropovich, and its music directors have even the likes of Abbado, Ashkenazy, Haitink and currently Petrenko. It has performed in all the great concert halls of the world in four continents, 43 countries and 177 cities, and its 3,000 alumni now populate the orchestras of the world."
In a time when politics is raw with arguments over Brexit and peace is regularly shattered by news of conflict, terrorist attacks, immigration and division amongst communities, the EUYO is a strong symbol of unity and the power of music. Bernard Haitink Conductor Laureate European Union Youth Orchestra says,
"For 40 years the European Union Youth Orchestra has been the very definition of excellence and commitment, consistently proving the value of bringing together young people from diverse European cultures. At a moment of such challenge for Europe, it is simply unthinkable that this beacon could be destroyed by lack of support and nurturing from the EU. Simply unthinkable." 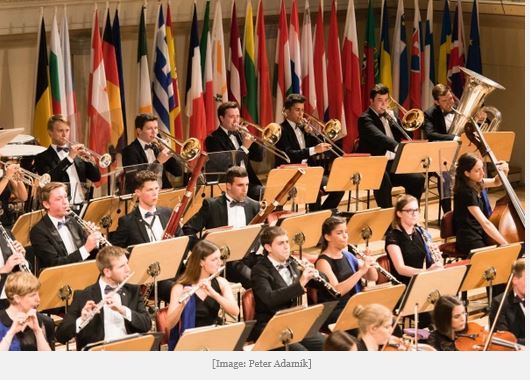 The orchestra also provides an essential professional development experience for young orchestral musicians. Direction from experienced, acclaimed conductors, who over the years have included Claudio Abado, Sir Colin Davis, Leonard Bernstein, Daniel Barenboim, Herbert von Karajan and Vladimir Ashkenazy, allows players to develop their knowledge of key repertoire, experience the joys and challenges of touring and develop a network of peers across the EU. Working with top musicians on a range of repertoire in top concert halls across the world is an important experience for those about to start their professional performing careers. As a result of this work, the World’s orchestras are full of EUYO alumni.
In order to provide this resource, the EUYO requires funding from a range of sources. The orchestra is active in raising funds through corporate partners, charitable trusts and foundations and individuals, but funding from the EU is vital to its future.
As of 31st May 2016, an official EU Commission press briefing included the announcement that President Juncker, EU Commission President, had ordered a group of three Commissioners to find funding for the EUYO. This led to an announcement on June 1st of proposals to enable the European Union to return to core funding the EUYO.
However, the future of the orchestra is still not assured until the precise details of these proposals are confirmed; a matter that requires urgency and speed if the EUYO is to be able to plan future concert tours. The musical community continues to call for the issue to be resolved and for the future of the EUYO to be secured.
"We call upon the many professional orchestras, festivals and concert halls that have, for decades, been profiting from and enriched by the continuous work of youth orchestras like the EUYO to show their strongest support in this difficult situation. Cutting off the financial support for young musicians and those few truly non-profit organisations which strive to give them better chances in their future professional lives is a fatal signal and should not be taken as just another cultural policy decision. It means cutting of the very foundation of our cultural education and endangers the European cultural heritage we pretend to be so proud of" – Alexander Meraviglia-Crivelli, Secretary General, Gustav Mahler Youth Orchestra.
UPDATE
The EUYO were saved and continue to thrive. Visit https://www.euyo.eu to find out more about the orchestra.
Tagged as: EUYO, YOUNG MUSICIANS, YOUTH ORCHESTRA
Share this post: